Bacopa monnieri is clinically well established in Indian medicine as nervine tonic and it is used to sharpen dull memory.1 It gives relief from anxiety neurosis.2   It is used in homoeopathy empirically.  It has gained an official status in the pharmacopoeia because of its popularity.  Homoeopathic literature Dr. William Boericke’s Materia Medica, has a brief mention as follows: “Impaired memory and whooping cough, used as tonic for absent-mindedness, and for short and weak memory”.  Its ingredients resemble strychine, reserpine, chlorpromazine.3 It has free sterols, saponins linked to neuro pharmacological effects.  Alcoholic extract (eqv. to 1x) has effect on cerebral amino acid levels with simultaneous improvement in learning.4

Recent studies have established its mechanism of action on enhancing cognitive functions. The triterpenoid saponins and their bacosides are responsible for Bacopa monnieri’s ability to enhance nerve impulse transmission. The bacosides present in the drug aid in repair of damaged neurons by enhancing kinase activity, neuronal synthesis, and restoration of synaptic activity, and ultimately nerve impulse transmission. Many studies have proved its efficacy in Alzheimer’s disease,  and significant improvements in logical memory, learning skills, attentions, verbal learning, short-term memory, senile dementia, decision making, memory consolidation, executive processes, planning and problem solving, speed of information processing and motor responsiveness in both children and adults.

Where to use Schwabe’s Bacopa monnieri 1X tablets? 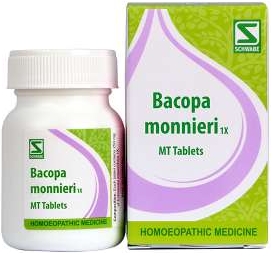 Schwabe’s 250 mg tablets of Bacopa monnieri 1X is for the physicians who intend to empirically use it for the reported clinical effect.  It can be used alone or as supplement to other medicines.

It can be used alone or as supplement to other medicines.

Dosage:  Unless otherwise prescribed by the physician, 1-2 tablets thrice daily. Children should be given one tablet thrice daily and when symptoms improve 1 tablet a day.  If complaints are not relieved, consult a specialist.

Side effects: No side effects of Bacopa monnieri 1X are known.

Interactions:  No interactions between Bacopa monnieri 1X and other products are known.